Jerusalem Peace Memorial (as a symbol)

Today, the rainbow symbolizes boundlessness (as cosmopolitanism), no borders no nations, national disestablishment, anti-patriotism, transgender ideology, so everything that shows up in the extreme left, green and Christian-socialist spectrum. We live in a time of revaluation of values. Let's look now at the original meaning of this beautiful and strong symbol in our still Christian influenced cultur:

The rainbow stands for the covenant of God with men (Genesis 9: 8-17).

It's not about ideology, it's about living in the awareness that there is a natural order and spiritual laws. Our society has left the solid ground of reality. Everything else is just symptoms. This means, still knowing the original meaning of the rainbow in our culture is of importance. This project is a crucial step to free from ties in a very significant area, where the souls of the people and thus our land are bound.

We need to understand again that the ties that keep people and our culture trapped are in the spiritual. Only there can it be solved: "The truth will set you free". Regardless of the state of the world, the rainbow should also remind us of the lasting faithfulness of God to the people.

About the rainbow connection

Why are there so many songs about rainbows and what's on the other side? Rainbows are visions, but only illusions, and rainbows have nothing to hide. So we've been told and some choose to believe it. I know they're wrong wait and see.

Someday we'll find it, the rainbow connection. The lovers, the dreamers and me. Who said that wishes would be heard and answered when wished on the morningstar?

Someone thought of that and someone believed it. Look what it's done so far. What's so amazing that keeps us stargazing and what do we think we might see?

Someday we'll find it, the rainbow connection. The lovers, the dreamers and me. All of us under its spell. We know that it's probably magic.
Have you been half asleep and have you heard voices? I've heard them calling my name.

Is this the sweet sound that calls the young sailors. The voice might be one and the same.

I've heard it too many times to ignore it. It's something that I'm supposed to be. 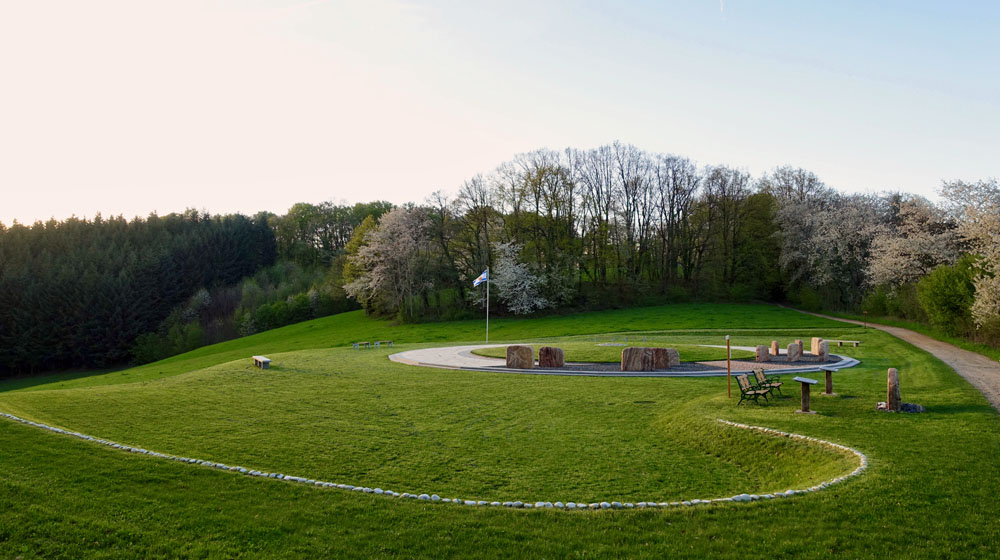 The Jerusalem Friedensmal with its "angel wings" bordering the Garden of Freedom.

A 26-metre long ring is prepared for the glass mosaic rainbow.

Rabbi Mendelson places the Turning Point with the inscription Chai -live- at the heart of the Jerusalem Peace Memorial.

At the end of the inauguration ceremony for the Turning Point for Life, a heavy rain starts to pour. And then, after the rain above the Jerusalem Peace Memorial…

The rainbow in the Friedensmal (monument) still has to be formed from a seemingly endless number of small pieces of glass mosaic. Every single piece means someone who wants to stand on the rainbow bridge. That is how we can work together for it. I am looking forward to your letters :-)